I've recently undergone another laser eye surgery. I've written a lot in the past about my vision and its impact on my emotional and mental health when it all goes sideways, but I don't think I've talked a lot about procedures themselves, or the experience as a whole. With that in mind, and another procedure behind me, I thought I'd take a moment and put down a few thoughts on the subject.

If you've never had laser eye surgery before, specifically Nd:YAG laser surgery, the physical experience of having the procedure done is definitely a unique one.

Unlike LASIK and other laser surgeries which re-shape the cornea of the eye, the Nd:YAG laser (neodymium-doped yttrium aluminium garnet, which refers to the crystal used in the laser) is used to treat various conditions inside the eye.

For me, that procedure was a posterior capsulotomy to treat a 2+ posterior capsule opacification, 3 years after cataract surgery. PCO can apparently occur any time after cataract surgery and does so in about 20% of all cataract patients. Patients who are younger when they have cataracts removed are more likely to experience PCO. The style and material of the lens implant are both also contributing factors.

But enough about that, back to the lasers. We want to get to the good stuff.

Essentially, you'll be seated in a chair, with your head in a chin rest on a slit-lamp microscope (similar to the type used in a normal ophthalmic eye exam), while the surgeon sits across from you operating the laser. Sit still! They're firing lasers into your eyeball.

That eye, by the way, will be dilated, very dilated, in the case of a posterior capsulotomy. This is to ensure that the hole created during the procedure is large enough that you won't be seeing the periphery of it when your eye is dilated naturally.

Usually before the procedure, a "contact lens" will be placed on your eye. I put that in quotes, because while it is a contact lense in the sense that A) that's what it's called, and 2) it does come into contact with your eye, it's nothing at all like what you're picturing in your head right now. 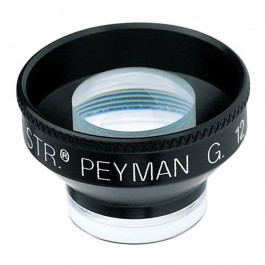 The lens serves a few purposes. First, it keeps your eye open so you can't blink. Second, it helps keep the eye still. Finally, it allows the surgeon to more precisely focus the laser.

Fortunately, before this lens is positioned, your eye will be well and truly numbed and the lens well coated with a lubricating gel, so you won't be bothered by the lens and the not blinking.

Then comes the actual lasering. On this particular occasion the procedure I was having; the posterior capsulotomy, is a surgery designed to basically punch a big hole into the capsular bag which holds the lens of your eye (or in my case the interocular lens implant placed there after cataract surgery). It's this capsular bag that separates the anterior chamber of the eye, where the lens sits, from the posterior chamber, containing the vitreous and the retina.

Describing what the laser procedure itself feels like is very difficult to do, because it's an odd sensation, but I'll try and describe my experience.

Each time the laser was fired, I would see a brief flash of blue-white light, hear the pop of the laser, feel nothing at all in my eye, and then feel a firm little tap against the inside of my skull, on the back of my head directly behind my eye. It happened in that order, but it all happened very quickly. Your average posterior capsulotomy runs between 10 and 30 shots with the laser. I lost count of how many my surgoen used, but it was definitely at or exceeding the upper end of "average."

I've had Nd:YAG procedures on my iris before, which did have some discomfort, but the capsuolotomy, strange though it felt, was entirely painless.

I think patients having this procedure probably run the full spectrum in terms of anxiety. Emotions in the waiting room (which was particulalry crowded this day) ranged from completely relaxed to "I just want to run away and hide." I was probably the most anxious of anyone - but then, I think I was the only person there who had only one eye... which had pre-existing retina damage. This did make for an unnerving experience and did put me at a higher risk for serious complications, like retina detachment or tearing and macular edema.

Once the capsular bag is ruptured, the barrier between the anterior and posterior chambers of the eye is destroyed. This causes changes in the flow of the vitreous, which can pull on the retina, leading to complications that can potentially cause vision loss. Fortunately, the chances of that happening are very minor for a normal, healthy eye.

Just to be safe, two days prior to the Nd:YAG capsulotomy, I underwent a very thorough retina exam and was was cleared for the procedure by my retinologist; a nationally renowned retina specialist who has been following and managing my eye care since I was 6 months old.

The surgeon who performed this procedure was the same doctor who did my cataract surgery three years ago. In addition to being an incredibly skilled surgeon, he's also one of the nicest people I know, and I knew he would do everything possible to protect my vision. He has a track record of playing it safe with my eye, having insisted on doing my cataract surgery under general anesthesia due to my monocular vision and severe nystagmus. I knew he wouldn't take risks for the sake of dhering to a schedule.

When you only have one eye and your doctor is about to go all Han Solo on it and start blasting you with lasers, it helps in more ways than I can articulate for that doctor to be someone you know and trust completely.

After the procedure was finished, my doctor explained what things I needed to look out for; pain, redness, flashes of light, shadows over my vision, an increase in floaters, a decrease in visual acuity.... I was told not to wipe my eye, because it would be so numb that I could scratch the cornea without realizing it.

I then left the surgery room where the laser was and went back out into a small post-op area where a nurse rinsed the gel used with the contact lens out of my eye and cleaned all of that up. Next, she put in a single pressure-lowering eye drop to prevent a post-operative rise in itraocular pressure. I forgot to ask what drop she was using, but judging from the burning/stinging in my nose and throat and the mild headache that came on a few minutes later, I suspect it was Alphagan P.

She then checked my vitals and gave me a sheet containing the post-op instructions my surgeon had just discussed with me, as well as an appointment time for my follow-up exam with my local optometrist, two weeks later. After that, I was on my way.

Once I got up and started moving around, I noticed a few floaters in my field of vision. This was normal and I had been told to expect it, and also that they would clear up over the course of the nedr few days to weeks. There was a lot of particulate matter floating around in there from the posterior capsule, and that would have to settle.

By the time we left the surgery center it was dark (my appointment was for 2:15 in the afternoon, but they had been very backed up that day due to an equipment failure on one of the lasers). I'd brought sunglasses with me and found that, even at night, I still needed to wear them, because the headlights and street lights were painful to look at due to how extremely dilated my eye was.

About fifteen minutes after we left, the numbing medication started to wear off and I began to feel some stinging and irritation. This is also when I noticed the stinging in my nose and throat from the pressure-lowering medication. Shortly thereafter, I started to develop a mild headache.

I'd been told to be on the lookout for pain, but this didn't seem like the type the doctors were talking about. It was just surface irritation and the headache wasn't centrally located around my eye. it just felt like a normal headache. I suspected my discomfort was a combination of the drops, irritation from the contact lens, and just in general the poking and prodding my eye had endured that day.

I came home, took some ibuprofen, had dinner, and lounged around for a bit before getting a good night's sleep. By morning, the irritation was mostly gone and by this afternoon, my eye was feeling back to normal.

I did notice today that my eye would become tired more easily than usual. This could be normal, or it could just be specific to me, given the laundry list of eye issues I have. Either way, I had the day off of work and spent a lot of time listening to podcasts (and recording odcasts) and, in general, taking it easy and taking breaks as I needed to.

Right now, my eye feels good and my vision is very crisp (given how limited it is naturally due to other eye conditions). The amount of floaters in my vision has decreased significantly already. Every now and then, I'll see one wander by if I change positions suddenly, but for the most part, I don't notice them.

So that's it. Eye surgery number 8 (number 7 for this eye), over and done and all is well. It was a long, expensive, and nerve-wracking day, but the end results were definitely worth it.

Recently at StickyAlbums, we had need of a way to shrink photos, specifically JPEGs, down to at or below…