The other day, I decided to take my truck out for a spin. 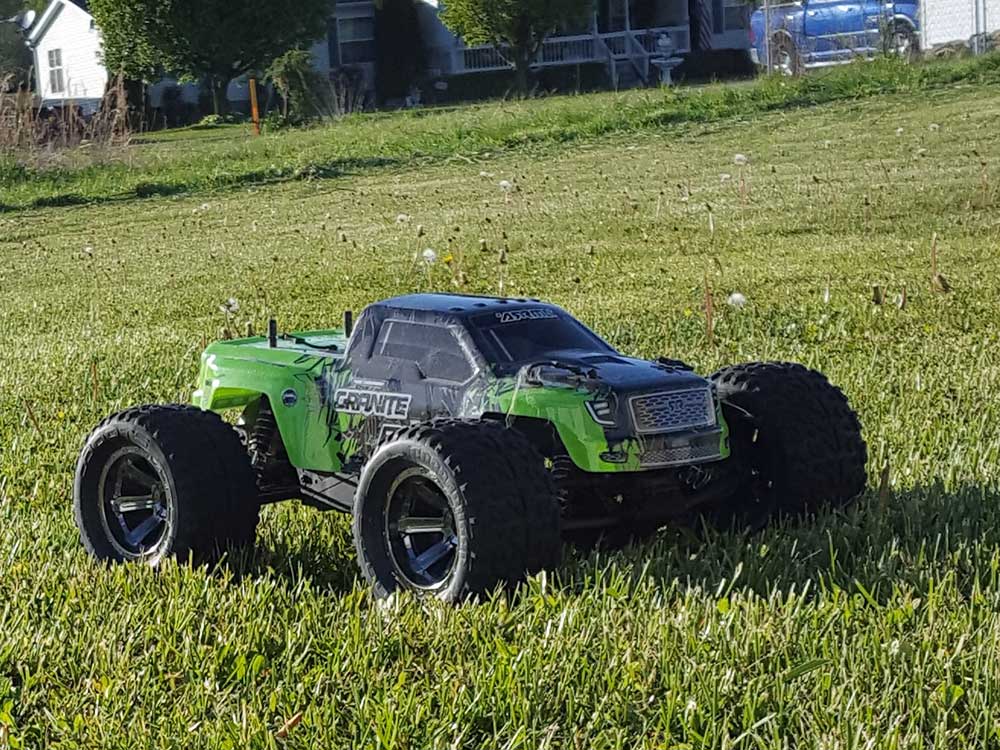 Unfortunately, thanks largely due to my lack of depth perception, I wrecked. Hard. 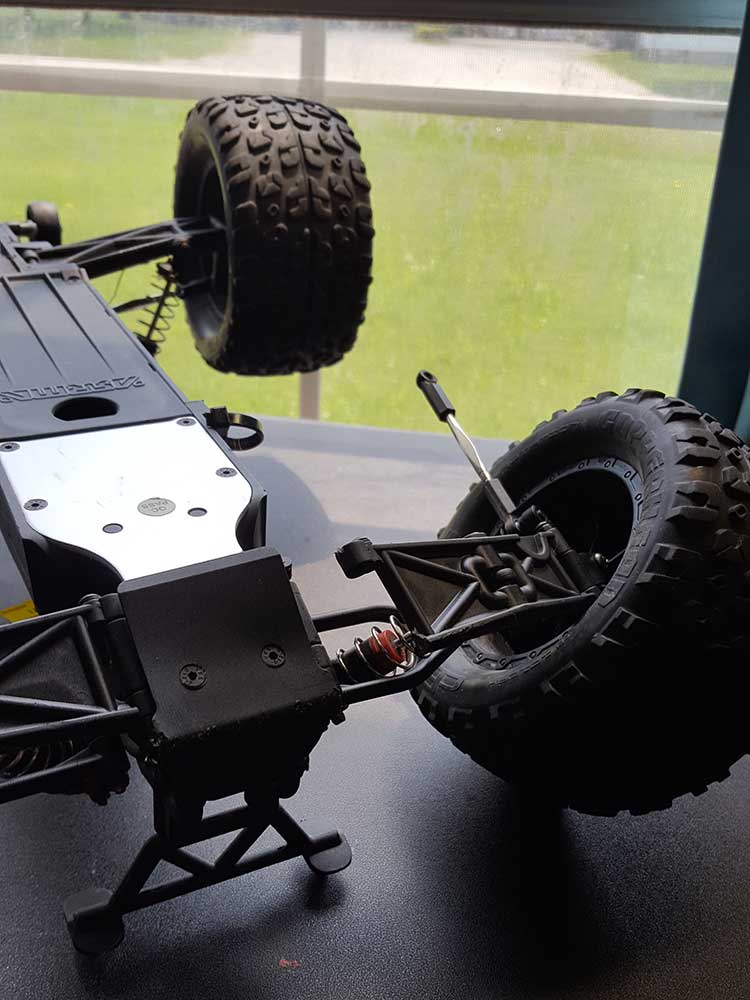 Upon inspection, I noticed that in addition to the front suspension arm, my left front shock had come apart. It didn't appear broken, the threads had just popped loose. 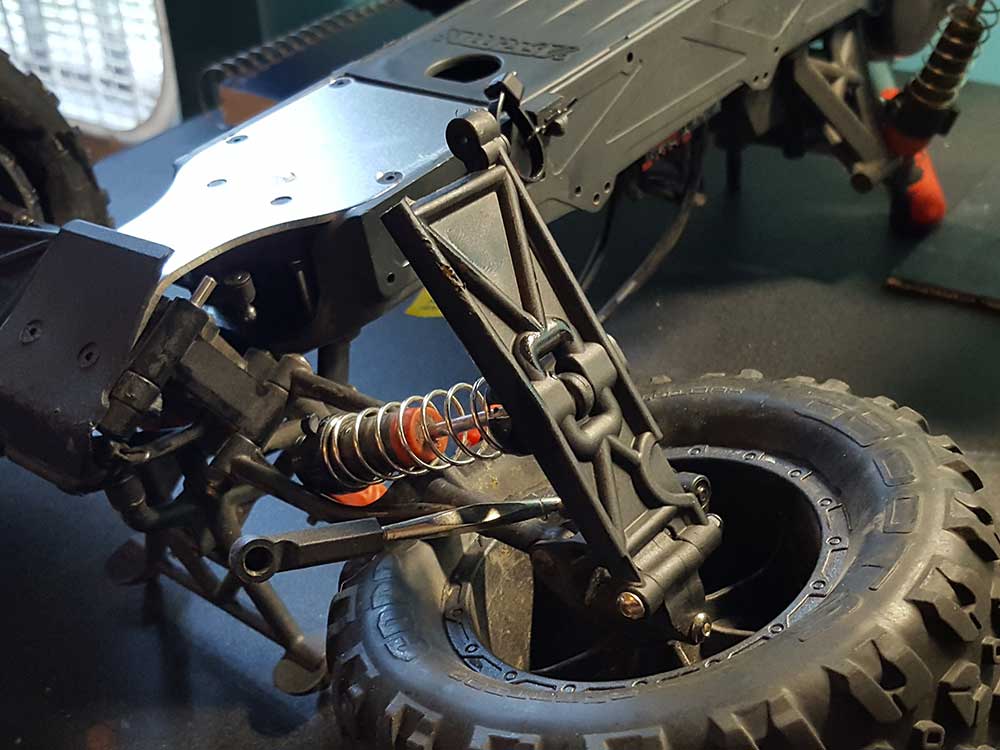 (it's a little hard to see here)

I went to Arrma's website and downloaded the exploded diagrams of the truck and the parts list, which conveniently linked to all parts on hobbyshipper.com. At least that made ordering replacements easy.

Side note: I'd ordered from Hobby Shipper once before, so I already had an account there. When I went to order this time, I couldn't remember the password, so I chose to reset it. Instead of being emailed a link to securely pick a new password, they emailed me my password in plain text! As a developer, I gasped in horror, died a little on the inside, and then paid via my old and seldom-used PayPal account, rather than giving them my credit card number.

Once the parts came in, I set about making repairs. 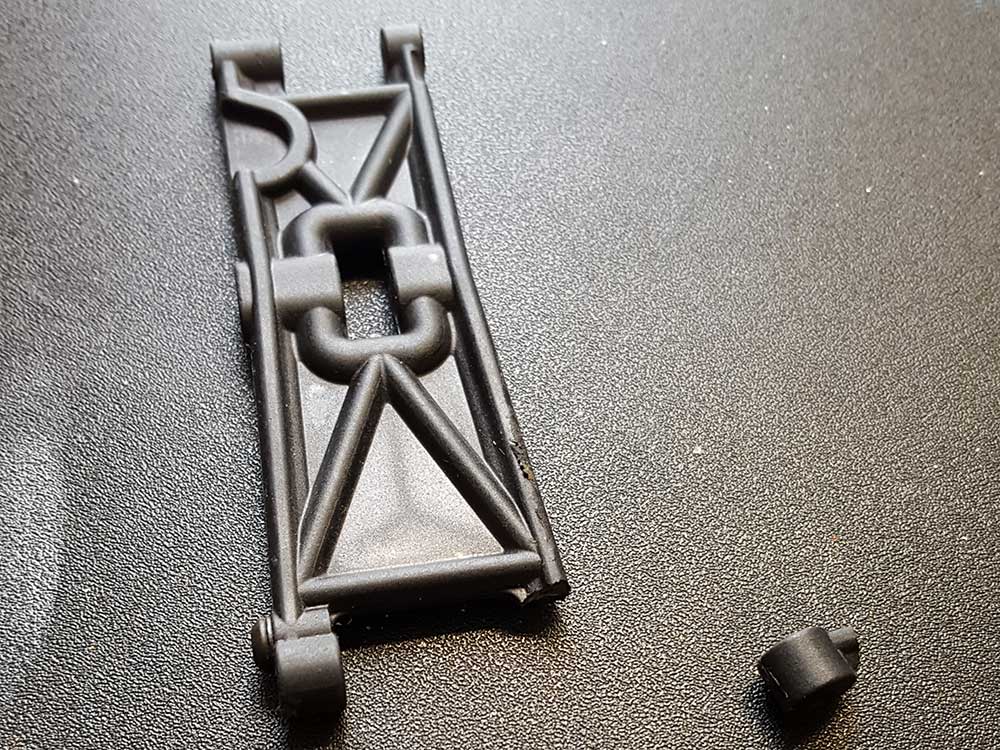 After that, I had to re-fill the shock woth shock oil, which I'd ordered from Amazon while waiting on the other bits to arrive. 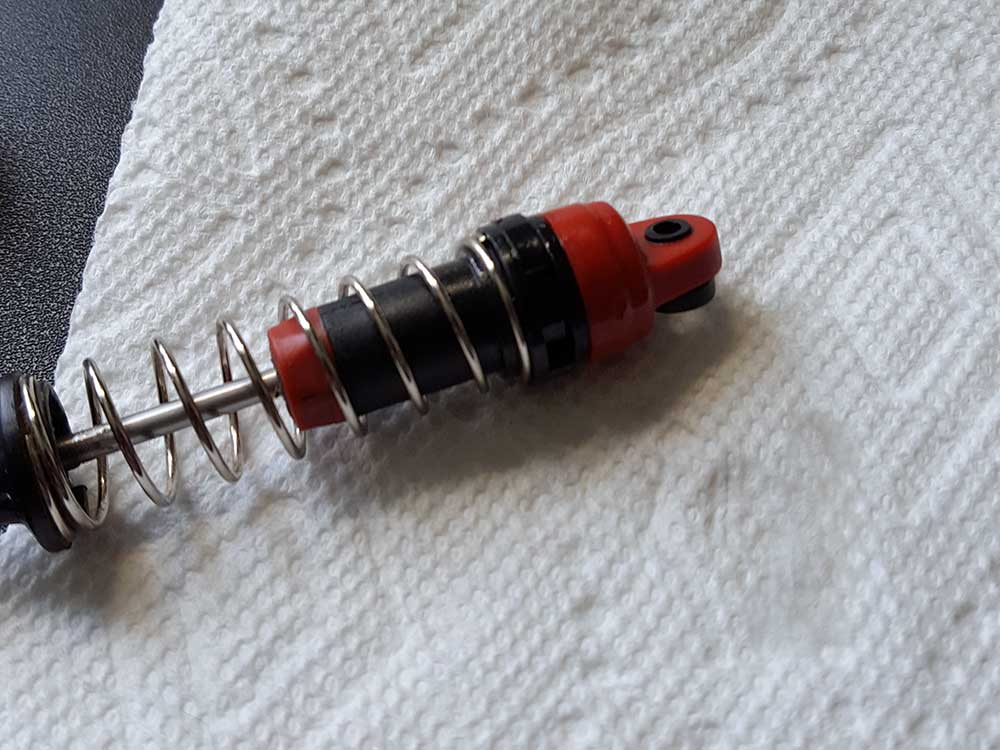 Then I put it all back together. Awesome! That wasn't so bad. 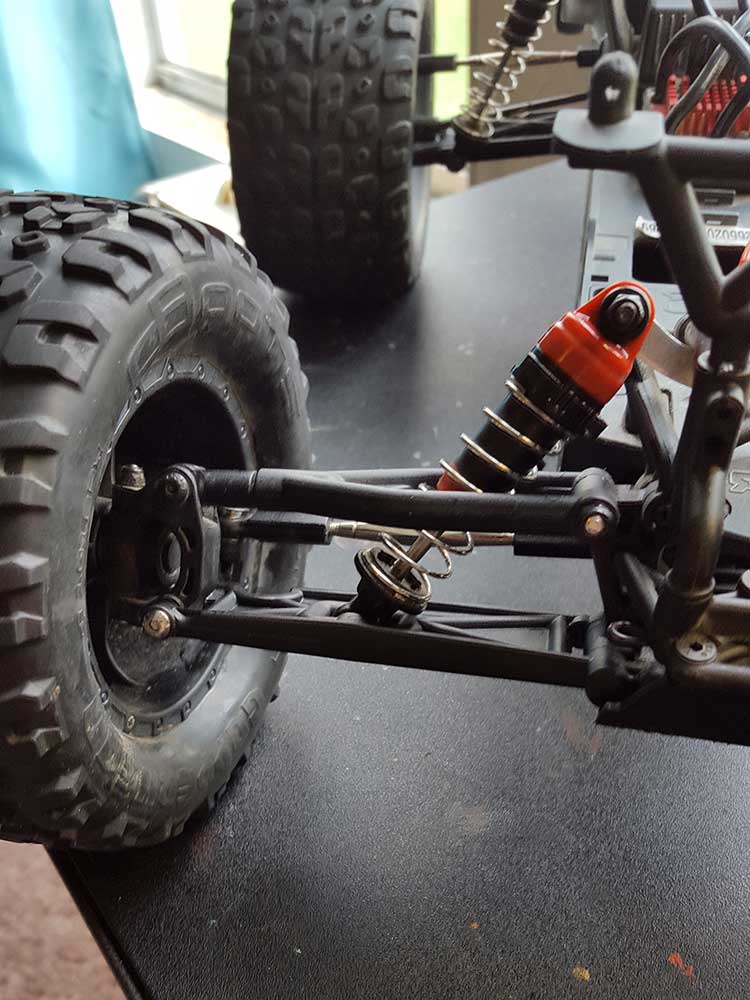 Except... wait a minute. I missed something. My right shock is also damaged. I didn't notice it at first.

I know almost nothing about trucks, even the R/C variety, but Arrma's diagrams told me that the broken piece I needed could be found in the Rod End Set - makes sense. Off to order another part....

After the piece arrived and I got it installed (no photos of that because it confused me at first and I got too caught up in figuring it out to take a picture), it was time to re-fill that shock, as well. 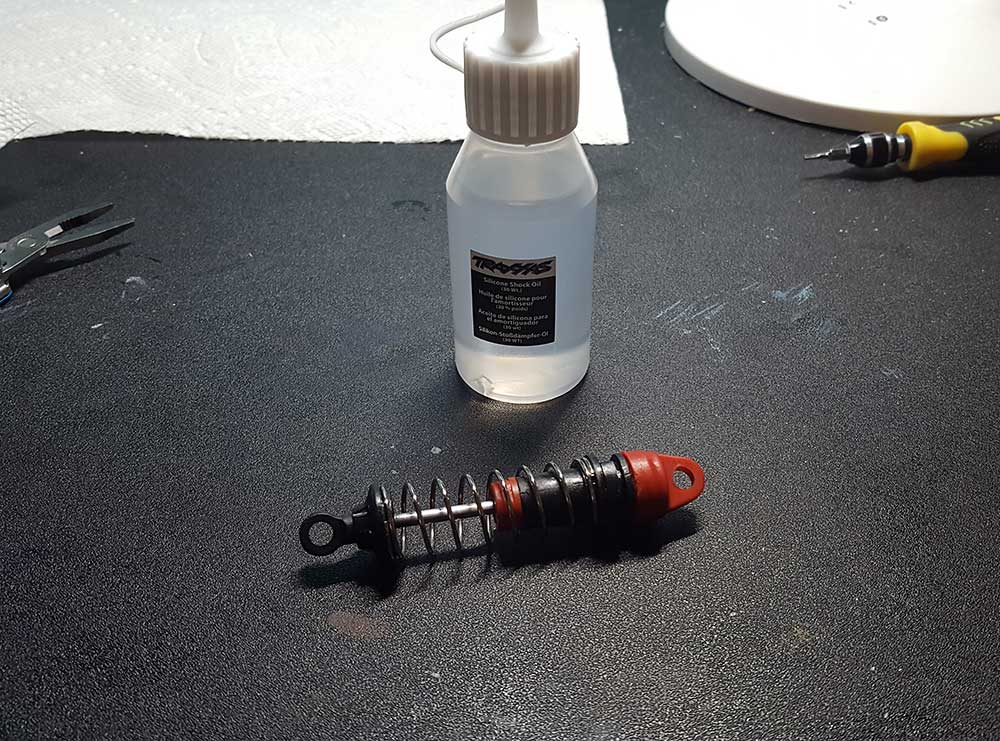 Filled to the top with 30wt shock oil. I let this settle for a few more minutes in order to get the air bubbles out. Some dude on YouTube told me this was important. 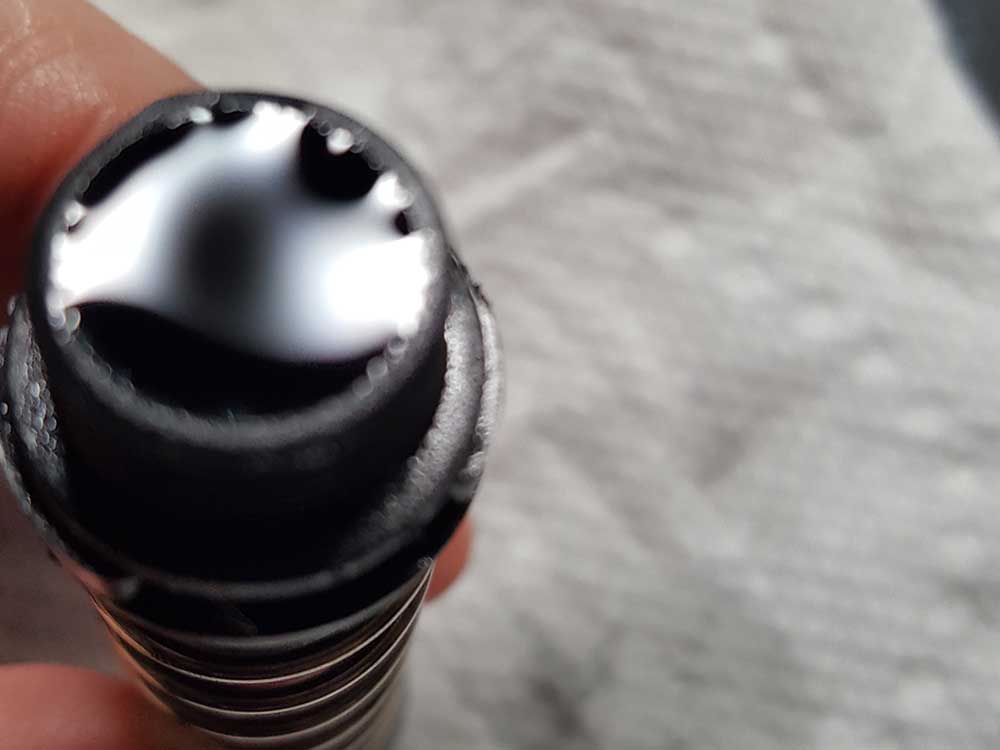 Woops. I almost forgot this little grommet, which I'm sure has some technical name other than "grommet" (Ahh, Arrma calls it a 3x5.8x6mm "ball." I like grommet better, so we'll stick with that.) 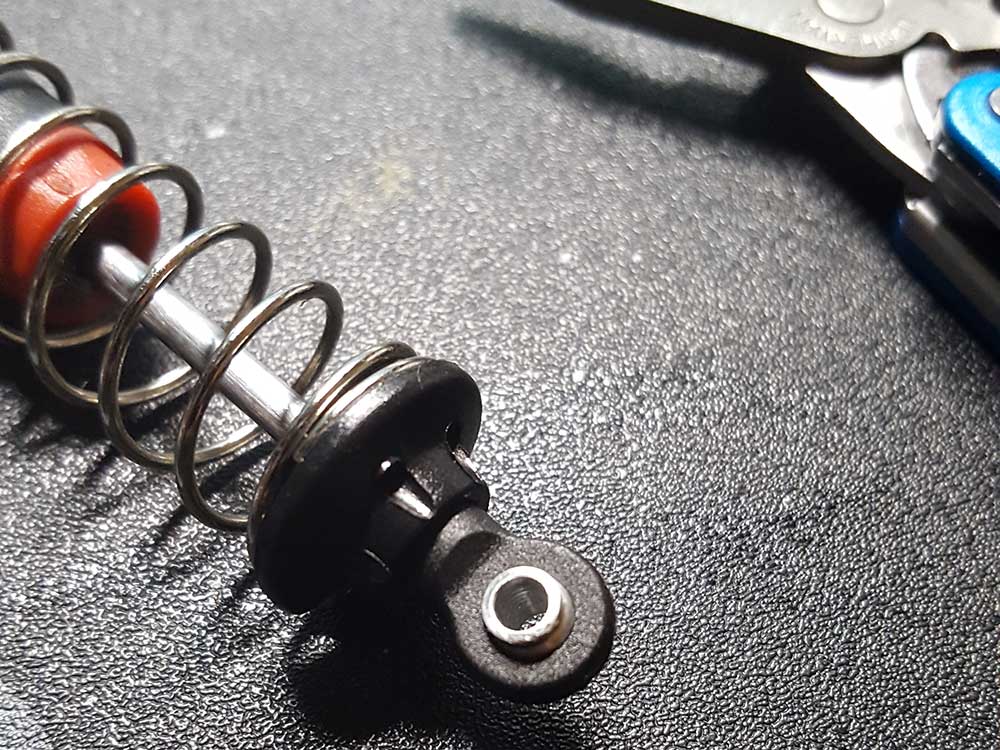 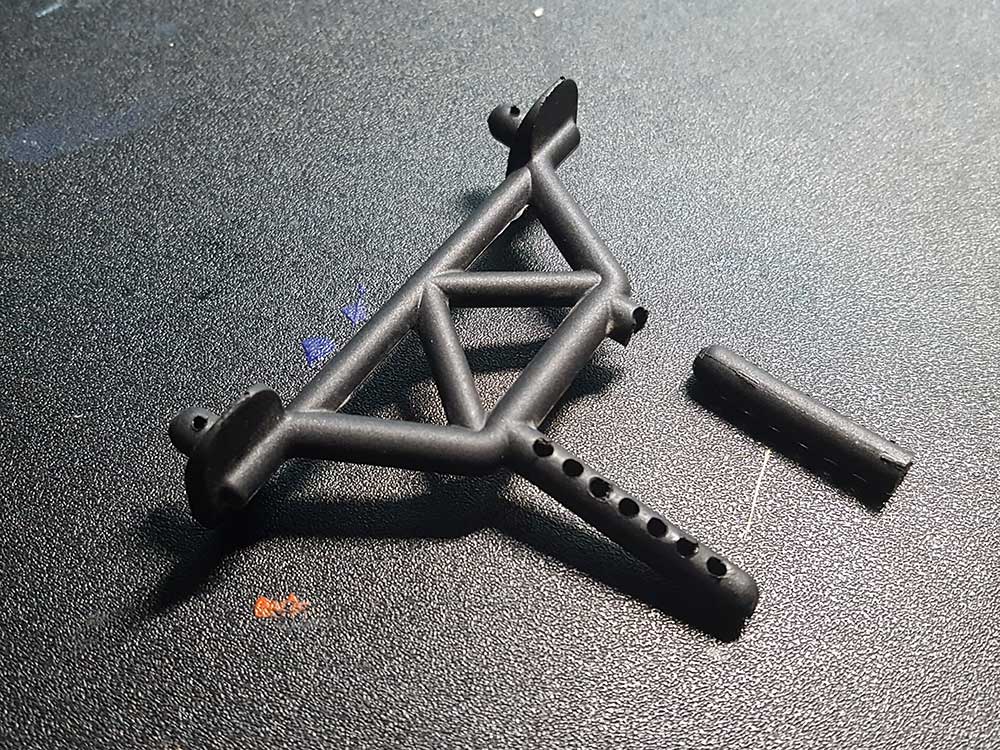 Well... that stinks. Time to make yet another order.

So that's where I stand right now. I'm waiting on that last piece to come in, and yes, I did give everything else a thorough going-over this time, just to make sure I hadn't overlooked anything else.

So what did running head-first at full speed into a concrete bench get set me back?

That's not too bad. However, it took me three rounds at repairing the truck to hunt down everything that was broken (because I'm blind and inexperienced). So I ended up paying $10 more in shipping than I needed to because I made three separate orders (shipping on each order was $5). Also, the composite chasis plate ended up not needing replaced. I'd thought it was bent, but it turned out that a screw under it had worked its way out and was just pushing it up. I could have saved another $9 there.

All in all, I spent about $67.50 and could have spent $48.50. It's not the end of the world, and I do have those pieces as spare parts now, but it's a little frustrating, and it's dragged the process out about 2.5wks longer than it otherwise would have. I should have the final part in sometime next week.

It could be worse... Imagine if I was flying model airplanes....

I've decided to make a board game. This is something I've wanted to do for a while now, ever…

The final bits for my Ready Player One inspired Gunter costume for GenCon arrived today. First up, I ordered…